Let me lead you into the world of love, betrayal, jealousy and revenge. Sit back and make yourself comfortable as we transport into a world of kings, princesses and magic. Once upon a time, many years ago (sorry couldn’t resist this as an opening to the story) Bendigeidfran (Brân the Blessed), King of Britain, was sitting on a rock by the sea at Harlech gazing out to see and saw a fleet of ships approaching form the West. These were the ships of Matholwch, King of Ireland. Matholwch had come to ask for the hand of Bendigeidfran’s sister Branwen in marriage. Bendigeidfran agrees to this, and a feast is held to celebrate the betrothal. While the feast is going on, Efnisien, a half-brother of Branwen and Bendigeidgfran, arrives and asks why there are celebrations. On being told, he is furious that his half sister has been given in marriage without his consent, and vents his spleen by mutilating Matholwch’s horses. Matholwch is deeply offended, but after hearing the conciliatory words spoken by Bendigeidfran he became calm. To further resolve the union between the kingdoms of Britain and Ireland, Bendigeidfran also gives him a magical cauldron which can bring the dead to life. However, when used and the dead are brought back, they will be mute. 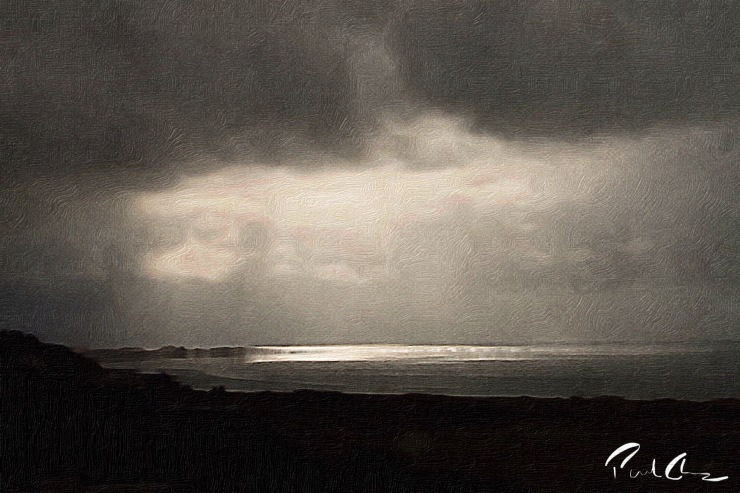 When Matholwch returns to Ireland with his new bride, he consults with his nobles about the occurrences in the Isle of the Mighty. They are outraged and believe that Matholwch was not compensated enough for the mutilation of his horses. In order to redeem his honour, Matholwch banishes Branwen to work in the kitchens, as punishment for Efnisien’s mutilation of the horses, though not before she gives birth to an heir, Gwern.

During her isolation and loneliness far from home Branwen tames a starling and teaches it to speak.  After a while Branwen sends the starling across the Irish Sea with a message to her brother complaining about her treatment by Matholwchas. On hearing the news Bendigeidfran is enraged and raises a force of fierce warriors to avenge the plight of his sister. Some swineherds see the giant Bendigeidfrân wading the sea and report this to Matholwch, who retreats beyond a river and destroys the bridges. However, Bendigeidfran lays himself down over the river to serve as a bridge for his men, uttering the gnomic words, “A fo ben, bid bont” (‘He would be a leader, let him be a bridge”). Matholwch, fearing war, tries to reconcile with Bendigeidfran by building a house big enough for him to fit into in order to do him honour. Matholwch agrees to give the kingdom to Gwern, his son by Branwen, to pacify Bendigeidfran. The Irish lords do not like the idea, and many hide themselves in flour bags tied to the pillars of the huge newly built house to attack the Welsh. Efnisien, checking out the house prior to the arrival of Bendigeidfran and his men, guesses what is happening and kills the hidden men by squeezing their heads. At the subsequent feast to celebrate Gwern’s investiture as King of Ireland, Efnisien in an unprovoked moment of rage throws his nephew Gwern into the fire. 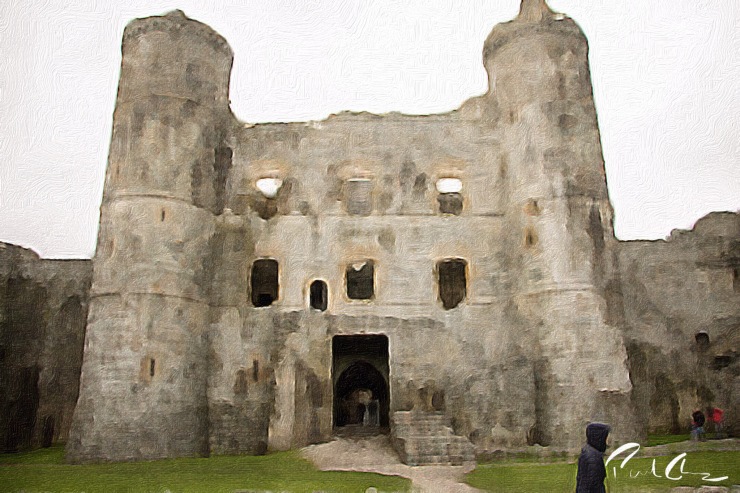 This led to a devastating war between the two islands. During which all the Irish are killed save for five pregnant women that lived in Wales who repopulated the island, while only seven of the Welsh survive to return home with Branwen, taking with them the severed head of Bendigeidfran. On landing in Wales at Aber Alaw in Anglesey Branwen dies of grief that so much destruction had been caused on her account, crying “Oi, a fab Duw! Gwae fi o’m genedigaeth. Da o ddwy ynys a ddiffeithwyd o’m hachos i” (‘Oh Son of God, woe to me that I was born! Two fair islands have been laid waste because of me!’). She was buried beside the river Alaw.

Bendigeidfran had commanded his men to cut off his head and to “bear it even unto the White Mount, in London, and bury it there, with the face towards France.” And so for seven years his men spent feasting in Harlech, accompanied by three singing birds and Bendigeidfran’s head. After the seven years they go to Gwales in Penfro, where they remain for fourscore (80) years. Eventually they go to London and bury the head of Bendigeidfran in the White Mount. Legend said that as long as the head was there, no invasion would come over the sea to Britain.

This is very much an abridged version of the original tale found in the “Second Branch of the Mabinogi”. If you wish the read an accessible translation then you can’t go wrong with a new book by Sioned Davies, The Mabinogion. But if you want something more modern, then Seren Books have published a reworking of the more popular takes, bringing the stories into today. Branwen’s story is incorporated into “White Ravens” by Owen Sheers. Both are excellent reads, so why not dip your hands into your pockets and settle down with a glass of wine for an hour or two.