The caravan site we stayed in over Easter was just outside Llandecwyn near Talsarnau. The new village of Llandecwyn is strung along the road from Maentwrog to Harlech, and comprises of a few houses, farms and a chapel. But the history of Llandecwyn goes back much further than the relatively modern houses currently visible. Immediately behind our caravan was a wood with an enticing footpath disappearing up the hill. And so of course like Hansel and Gretel, Aunty and I headed off into the wood hoping not to find any witches. We came across and old road and followed this up to Llyn Tecwyn Isaf (Lower Lake Decwyn), a small sheltered lake hidden among the hills and trees.

Further up the hill is the ancient church of Llandecwyn, a single small church surrounded only by farms. Saint Tecwyn is the patron saint and founder of Llandecwyn sometime in the sixth century. According to Enwogion Cymru, he was the son of Ithel Hael, and came to Britain with Saint Cadfan, in the time of Vortigern “who procured wise men and divines from Gaul, now called France, to renovate Christianity in this Island, in consequence of the decay and failure that had befallen the faith in Christ.” (1) 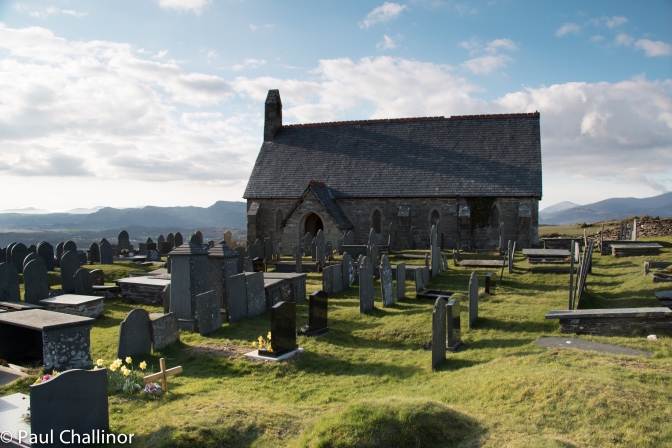 The present Church of St Tecwyn is almost wholly of 1879-80, but replaced an earlier building on the site. The churchyard walls and lychgate predate this rebuilding of the church. The walls are difficult to date, but the lychgate is probably C17 or C18.

When the church was restored in 1879 very little of ancient church was kept. However the an inscribed stone was found near the alter. This was left open and unflustered so the congregation could view it. The stone is about 14inches long and 4inches at its widest. The four line inscription was interpreted by Prof Edward Anwyl to read

“(The Cross of) Saint Tecwyn, Presbyter, to the honour of God and the Most Illustrious Serveant of God. Heli Deacon Made Me. ABCDEF.”

The date may be 11th Century. When you look closely it is possible to see that the letters are not cut by chisel, but have been are created by a series of dots, possibly pecked into the stone by a nail or other sharp point.

1: Enwogion Cymru, A Biographical Dictionary of Eminent Welshmen, from the Earliest Times to the Present, and Including Every Name Connected with the Ancient History of Wales By Robert Williams, Llandovery, 1852. URL: http://books.google.co.uk/books?id=_wMGAAAAQAAJ

4 thoughts on “Llandecwyn – an ancient church in Merionydd”