At the moment we are beginning to feel a little jaded with the weather as it is this winter. I am no longer a “Man from Wales” but feeling more like the “Man from Atlantis”! It’s bl****dy well raining still! What can we do on yet another wet weekend? Let’s go to a distillery, but not in Scotland or Ireland, but here in good old Cymru. Yes that’s right – we make whisky here in Wales. Or rather Chwisgi – there’s no K in the Welsh alphabet. Now we’re talking! And I’m partial to a good malt. Whiskey seems to attract legends and myths, and in Wales we like our stories. There is a tradition that ‘chwisgi’ has been distilled in Wales for a very long time. One of our hero’s Reaullt Hir is said to have distilled ‘chwisgi’ from braggot brewed by the monks of Ynys Enlli (Bardsey Island) in 356 AD. Sadly this may not be true. The  first monastic community on the island was founded by St. Cadfan, a Breton, in 429. A little late for our story. Which is a shame as I like the idea of drunken monks having a good time with a rough warrior hero.

But there are other early references suggesting that distilling of strong drink was was being undertaken, but perhaps not as we know it today. Taliesin mentions distilled mead in his ‘Mead Song’. Again though we need to be careful, Taliesin was probably a historical figure, but many of the deeds and writings attributed to him are shrouded in myth and mystery as well. It has been suggested he might be the inspiration for Merlin.  Another source suggesting distilled alcoholic drinks were known to the Welsh can be found in the “The Mabinogion”, a collection of Welsh sagas possibly dating from the 11th century, but containing elements that are probably much older. So what should we believe? Me, I like a good story. And the romantic in me wants me to hold onto these stories. But does it really matter? Probably not – so let’s enjoy the stories. Myths are often based on truth.

What are there any other references to a good old ‘chwisgi’ Cymraeg. There is a hint of distilleries in Wales during the 18th century but again there is very little, if any evidence to support this. Apparently there was a commercial distillery opened by a Williams family in Dale, Pembrokeshire In the early 1700s the Williams family started distilling whiskey in Dale, Pembrokshire. This was followed by another distillery opening in the mid 1700s by a Daniel family in Cardigan. Evan Williams, later emigrated from Wales to the USA and helped found the Kentucky Whiskey industry and whose name is still attached to a number of high quality current day bourbons. Although there is a rumour that the Daniels family also emigrated and set up Jack Daniels, this has been denied by the USA distillery.

However, what can’t be disputed is the existence of the Frongoch Distillery, Bala. Founded in 1887 by Mr Robert Willis and Richard John Lloyd-Price of Rhiwlas, Llanfor and the Welsh Whisky Company Ltd. was registered in 1889. Robert Willis is perhaps better known today as the founder of sheep dog trials. Water for the ‘water of life’ was taken from the  Tairvelyn Brook and rivers Mynach and Tryweryn on Lloyd-Price’s Rhiwlas Estate. Unfortunately the distillery did not stay open for long and going bankrupt and ceased trading in 1910.

Why did whisky production in Wales cease in the early 1900’s? The closing of the Frongoch distillery in north Wales coincided with the height of the “chapel building mania” in Wales and the growing influence of the temperance movement. The last of the Welsh religious revivals stressed the importance of temperance and the impact of this philosophy was felt in Wales until recent times. Only in recent decades has it been possible to buy a drink on Sunday in Wales. I can remember when growing up in Merionethshire that the pubs in the county shut on Sundays, but across the border in Mongomeryshire the pubs were allowed open. Needless to say the paternalistic attitude of the non-conformist churches did not prevent the Welsh from gaining a reputation as a fairly hard-drinking race, but that’s another story …

The Frongoch Distillery had anther existence later as a prisoner of war camp. It was first used to house German prisoners during the First World War. But by 1916 it housed captured fighters from the Irish War of Independence.

So where is this distillery I started writing about? It’s in the Brecon Beacons, situated in the small village of Pendryn. This is in the shadow of the hulking mass of Fan Llia and Fan Nedd to the north, and right on the 6edge of the Welsh coal field to the South.

The way whisky is distilled at at Penderyn is unlike any other distillery I have visited. The process involves the use of a single copper pot still. Scottish distillery use two copper still, and in Ireland they often use three. This single still system  was invented exclusively for Penderyn by Dr David Faraday, descendent of the ground-breaking Victorian scientist, Michael Faraday. The 92% alcohol by volume our new spirit has the highest strength of any malt wysgi; and with just one barrel produced every day, it is not the most prolific distillery open today.

The alcohol is then diluted down using water from a deep well below the distillery. This well taps into the aquifer in the deep rocks below. This water has drained off the Breacon Beacons and filtered down through the rocks. There is more on the Pendryn website so I won’t bore you too much with the details. The tour included a walk through the distillery, viewing the copper stills, malt hoppers and distillation jar. However we weren’t allowed to take any photographs inside – possibly due to the potential for sparks igniting the high purity alcohol. But we did have a taste of a coulee at the end of the tour. Well, Aunty did, but as I was the designated driver I took mine home with me in a miniature bottle, and of course a big bottle for later. 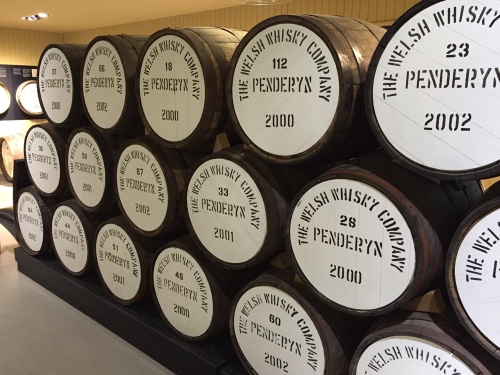 So how many whiskey’s does the distillery produce? At the moment they have a number of different types, some of which are special bottled versions of the main 3. The Maderia is a single malt, matured in bourbon barrels and then finished in Maderia barrels. This is my current favourite. But close second comes the Peated Single Malt, reminiscent of the island whiskeys from Scotland.  Thirdly is the Sherrywood. This is again matured in bourbon barrels, but then finished in Oloroso sherry barrels. I’ve not tasted this one yet, and it’s difficult to come by as the production volumes are limited. One day though. Besides whiskey they also produce award winning gin, both traditional and a botanical variety, and vodka.

There is another distillery open now in Wales, although not the yet producing whisky, the Dà Mhìle distillery in Llandysul is now open, but the first batch will not be ready until 2017. Now that’s another trip planned for later!