Last weekend we completed another short section along the coastal path. This did not include the sweeping views of the last section we completed in Cardigan, but involved marshland  and the industrial docklands of Newport. I should perhaps explain to those of you who do not know Wales, and add a word of caution, please don’t mistake our walks along the coast as an end to end endeavour. Aunty and I are completing it as and when we can, and wherever we happen to be.

We started this time where we left off a few weeks back, at Newport Wetlands. The ironic part of this stage of the walk, as in other areas where we need to cross or rather navigate ourselves around wide estuaries, was that we could see clearly from where we started where we would end up – less than a mile from where we stood. In fact we ended up walking 9 miles to get there. This involved walking over areas of the Gwent Levels, up along the banks of the Usk River, right through the docks and some of the more deprived areas for Newport before picking up the West Bank of the Usk back to the Severn Estuary and our eventual destination – West Usk Lighthouse.

The contrast between the green fields of the wetlands and the industrial landscape of the docks can be difficult to process. The two landscapes lie so close together, yet seem to be direct contrasts. This contrast must have been even greater a few years ago. Newport docks are no longer the force they once were. the decline of the coal and steel industries have left many of the quays derelict along the Usk River. 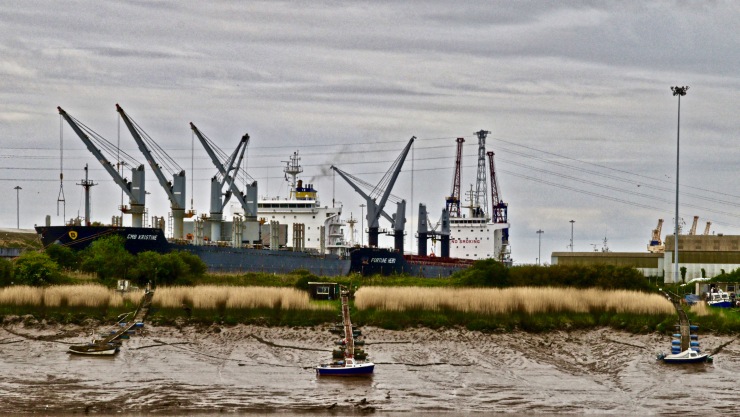 Despite the sometimes depressing nature of industry it is always possible too appreciate the beauty that nature confronts us with. Although the spring has been cold this year, the Dandelions are flowering and many are already setting seed. We see Danelions everyday, and as kids I was always fascinated by the symmetry of the seed heads. It is always worth taking a few seconds to appreciate these common sights. Before we got back to the country we still had some urban walking to do, and as we passed through some of more deprived areas of Newport there were still surprises waiting for us. Among dumps of rubbish, broken TVs and general detritus of life beauty still continues to survive. Orange Tip butterflies are difficult to miss, but in my experience difficult to photograph. They never stay still for very long, but I finally nailed a photo today. 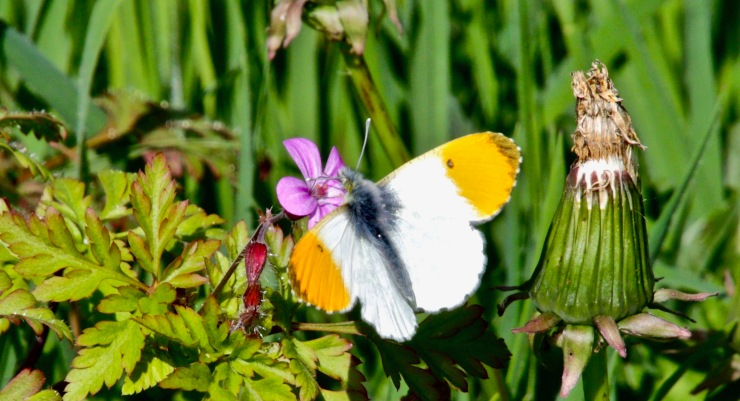 We finally left the urban sprawl of Newport behind and rejoined the banks of the Use River as it meets the Severn Estuary. Though Newport and the docks still maintain a brooding presence in the background.

We were now approaching the end of the walk as we neared West Usk Lighthouse. Built in 1821 as a partner to the East Uk Lighthouse to guide shipping into Newport Docks until it was finally decommissioned in 1922. It is now a Bed and Breakfast, a great use for an iconic building.

This may not have been the most picturesque stretch of Coastal Path, but it was an interesting one. The contrasts between the Newport Wetlands, the docks and the arrival at the East Usk Lighthouse shouldn’t be missed. It’s all part of Wales, it’s history and the people to made that history and continue to make it. We finished less than a mile from where we started as the crow flies, but had to walk over 9 miles to get there. Don’t miss out this part of the walk, it’s important.