August Bank Holiday seems to so long ago now as I look out the window at the rainy and murky weather outside the window. But But it’s always pleasant to remember it doesn’t always rain in Wales. After our visit to The Botanical Garden of Wales and Paxton’s Tower we took the long way back to the caravan via Dryslwyn Castle. It seemed that everyone else was doing the same. The car park was packed full, and we managed to squeeze into the last space.

Approaching Dryslwyn Castle would not have been an easy task. Perched as it is on it’s rocky summit, protected to the South by the Afon Towy, it presents the visitor, whether friend or foe, with a challenge. Today it’s an easy approach. The bridge over the wide meandering river not longer presents much of challenge, but it still looks forbidding, glowering down on you as you approach from the top of the almost sheer cliffs.

As you puff your way up the steep path to the now almost non-existent gates, its still possible to imagine the impact that this symbol of power and dominance would have exerted. Today the remains are few, but the intent of it’s building can still be perceived. The builders were making a bold statement. “I am here! I am the lord of this valley and you approach only under my sufferance.” A bit fanciful maybe, but what’s the point of having an imagination if you don’t use it?

So who built the castle? You’d have thought that this would be easy to answer,  but it turns out that it’s not absolutely clear. In the twelfth century This ap Gruffudd. Also known as “Lord Rhys”, reigned over the kingdom of Deheubarth and brought it a period of peace and stability. This was remarkable at the time as through political bounce and strength of arms he was able to resist the seemingly unstoppable advance of the English Marcher lords. But resist he did, and expanded his territory and ruled over a stable and rich area. But then it all fell apart on his death in 1197. Under Welsh inheritance laws land had to be divided between his sons. And of course brothers with sharp swords do not always get on. After a period of disputes, mini wars Llewelyn ap Iorwerth, Prince of Gwynedd stepped in and forced the brother to accept a settlement where the lands were divided among them. Although peace resulted, Dehubarth never again recovered. Enter Rhys Gryg, one of the sons who had control of the land around Dinefwr. Rhys Gryg married into the powerful Anglo-Norman de Clare family in 1219 and this enhancement to his status seems to have prompted the building of Dryslwyn Castle as well as upgrades to his main caput at Dinefwr Castle.

Following the death of Rhys Gryg in 1233, his lands were divided between his sons. Dryslwyn Castle passed to his younger son, Maredudd ap Rhys, whilst Dinefwr passed to the elder son, Rhys Mechyll. But as usual they fell out and started squabbling. Eventually it would all for naught. In 1277 Edward I declared Llewelyn ap Gruffudd, Prince of Gwynedd, a rebel. Amassing a huge force he marched through South Wales towards Gywnedd. Rhys ap Meredudd of Dryslwyn, (the sone of Maredudd ap Rhys, keep up there in the back) perhaps seeing where the chips were laying, quickly made peace and allied himself with Edward I’s campaign against Llywelyn. After the dust had settled, Rhys expected to be rewarded for supporting the successful English campaign. But even though he did manage to extend his territories from the Afon Aeron to the Afon Tywi. But that was a goos it got. Edward took the area around Dinefwr and most of the other territories once held by the member of house Deheubarth who had remained loyal to Llewelyn. Rhys had expected to be rewarded with these lands. It soon got worse as Edward started extending his authority over Rhys’s remaining lands. 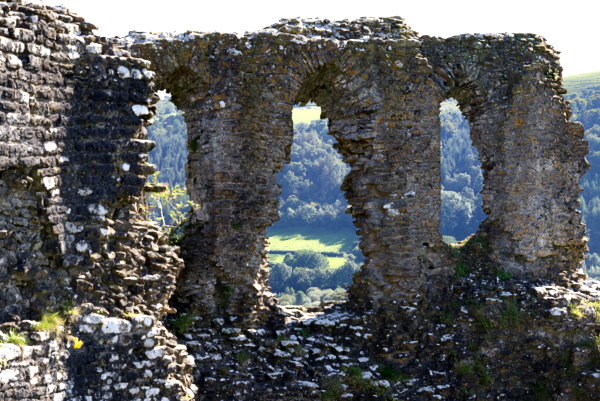 Understandably a little miffed Rhys in 1287, Rhys raised a large army and captured Dinefwr, Carreg Cennen and Llandovery castles. But it always seems to be that however big your army is there is always someone with a bigger army. Not to be outdone the English raised an even larger force of around 9000 men and by August 13th they laid siege to Rhys in Dryslwyn Castle. The siege lasted for three weeks before sappers undermined the walls and took the castle. Rhys managed to escape, living out the next 4 years a fugitive in his own countries. Ironically in January 1288 he was captured by Welshmen who had originally supported Llewelyn in 1277. He was taken to York and presented to the King, where he was tried and executed on the 2nd of June 1292.

After this and throughout the 13th century Dryslwn had a quiet time. Perhaps I should qualify that as relatively quiet t=for a Welsh castle. Under Crown control it was repaired and upgraded a number of times. In 1316 it was attacked during a Welsh rebellion, and then attacked again by Marcher Lords in 1321. Eventually coming back into Crown ownership in 1326, after which it was neglected and fell into disrepair.