Hidden down a single track road is an unprepossessing looking church. But it has hidden treasures, and it is a must visit. Getting there was not that easy, but with the intrepid trio of Aunty, Grandad and myself we bundled along the country roads of Monmouthshire to where I thought the church would be. The name should give a clue – Llanfair Kilgeddin. Now that’s easy, all we have to do is drive to the village of Llanfair Kilgeddin, I thought. In fact that part was easy, but the church was nowhere to be seen in the village. A little detective work with maps and the internet we were soon off down a very narrow lane and after 2 miles there it was straight ahead, in the middle of a field in the middle of nowhere. But that wasn’t it. We then started a treasure hunt. The church you see is no longer in service having been declared unsafe in 1982, but more on this later. The door was locked, but we found a small notice giving us a telephone number to ring so we could collect the keys. This started a small treasure hunt as we followed the instructions given to us by the church guardian (now it sounds like an India Jones plot), to a farm, a garage and an ice cream container (OK not so much an India Jones plot). Then armed with the impressively hefty key, there was nothing to stop us.

Earlier I mentioned that the church was declared unsafe and closed in 1982. The Diocese uncertain what to do, and with no funds to restore the fabric of the building proposed that it should be knocked down. Now that would have been a real shame. But there is a joint society in the UK called the Victorian Society and Friends of Friendless Churches. Coupled with locals they took over the management of the church, and supported by a 100% grant from CADW, now we can see the splender of the interior whenever we want (as long as you take on the role of India Jones that is).

The church itself looks like so many other small rural parish churches in the UK. Originally medieval the Victorians came along and ‘improved it’. But this time they did something really special. The local rector, Rev. William John Coussmaker (now there’s a name) was of an artistic bent himself, but also very well connected. Not only was he the great-grandson of the Earl of Balcarres, but the brother-in-law to the daughter of Lord Tredegar. But not content with just rebuilding the church the Reverend commissioned Heywood Sumner to decorate the walls illustrating the Benedicite in “sgraffito”. This was also an act of devotion to Rosamond Emily Coussmaker, his wife, who died in 1885. Sumner spent three summers completing the work from 1888-1890. If Aunty is getting ideas, I can always pop down to Ikea for a picture to hang on the garage wall.

Sgraffito is a complex and laborious method of decorating walls, and has been around for a long time in Europe and Africa. Five different coloured layers of plaster are applied to the wall, each layer at a different depth dictated by the design. These layers are then left overnight to dry. In the morning, the whole wall is covered in fresh plaster, which is then cut away to different depths to create the desired colours and reveal the picture. A single error can mean the day’s work is lost, as by lunch time the plaster is too hard to work. As a someone who can barely draw a matchstick man I’m in awe of the artistic and technical skills involved here.

Many of the scenes include local mountains and land marks. ‘O ye mountains and hills’ includes a view of the Suger Loaf, Blorenge and Skirrid Fawr surrounding Abergavenny. If you get the chance you really have to go and see the walls for yourself. Thankfully the Diocese was prevented from razing the church to the ground so that future generations can continue to appreciate the skills and artistry. However, despite this the church is not immune to threats. Today this main threat is from scrotes who deem it their right to steal and vandalise what doesn’t belong to them.in August 2017 the church was targeted and in the process they an oak door, valued at about £1,000, was damaged, along with four oil lamps dating back 300 years. Metal organ pipes and a brass plaque were stolen. They would have gained less than £50 for all this. Was it worth it? 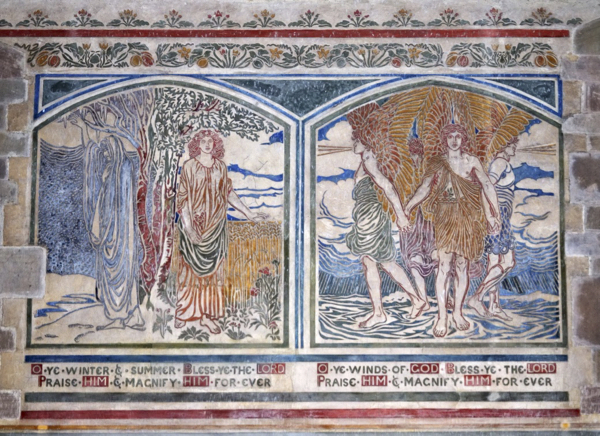