Stumble Head Lighthouse is right at the end of the world, Well, that may not be strictly true, but it feels like it. For one thing, in order to find it you need to want to find it. No, I’ve not come over all mythological. It is a physical place. It just feels remote. First of all you have to drive past the ferry port at Goodwick, then drive up a very steep road from the valley bottom. The road then gets narrow until you come to a very narrow and small road signposted Strumble Head. If you think this is a narrow road it quickly becomes really narrow, passing a few farms before suddenly you seem to driving straight for the cliff edge like a roller coaster. But just in time the tack, because that is what is is now, turns sharply left and finally brings to a small car park. But it’s worth it. The views are fantastic. Looking at the photos you’d think this was ideal weather. However, the last weekend in April this year was cold. Really cold. The strong wind directly from the north brought the temperature down to 4C, but also made it feel even colder. Aunty was dressed up ready for a Polar expedition.

The Strumble Head lighthouse is sited on a small off-shore island, Ynys Meicle (St Michael’s Island). The lighthouse is connected to the mainland by a short bridge spanning a gully filled with a maelstrom of sea rushing through the narrow gap. Unfortunately there is no public access across the. bridge. This is one of the last lighthouses built in the UK, and was finished in 1908-09 to work with the South Bishop Lighthouse 18 miles out to see to the South West. Built to protect the increasing shipping traffic between Fishguard Harbour and Ireland, it replaced another light ship placed out at sea in the southern part of Cardigan Bay. However, it took a long time to build a lighthouse on this stretch of coast.  A proposal to erect a lighthouse here had been made in the Trinity House Court Minutes for 7 July 1825 but it came to nothing.

The light was lit by paraffin, and this was pumped across to the lighthouse through a handrail incorporated into the original iron bridge. The current aluminium bridge replaced the iron bridge in 1963. The original light weighing 4.5 tons was rotated by a clockwork system. The light was suspended in a bath of mercury, and rotated around by weight suspended on a cable that gradually dropped down through the centre of the tower which had to be re-wound every 12 house by the keepers. Very similar to giant Grandfather Clock. The lighthouse was automated in 1980 and is now operated and monitored from Trinity House’s Planning Centre in Harwich, Essex, the opposite side of the UK. 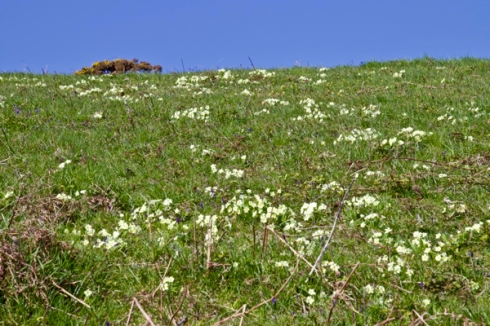 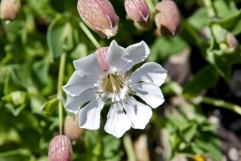 Strumble Head is known in wildlife circles as a great place to watch for cetaceans such as dolphins and porpoise. We didn’t see any on the day, but there were Common Seals around the base of the cliffs. Even though Aunty is always pleased to see seals, is was too cold to stick around for long. But despite the chill the flowers were putting on a show. There were banks of Cowslips, Common Dog’s Violets sparkled all along the cliff path and even the Sea Campions were beginning to put on in an appearance.

Just a few miles to the east of Strumble Head is Carregwastad Point, where a force of 1,200 French soldiers landed in 1797, the last time the British mainland was invaded. A 100ft long Last Invasion tapestry commemorating the event can be seen in the old town hall in Fishguard. Sewn in a ‘Bayeux’ tapestry style it’s a humorous and interesting account of the ill fated invasion. Many of the scenes on the tapestry relate to incidents on the Pencaer Peninsula. The Welsh version of the Beaux Tapestry!