We still have a few bits of the Glamorgan coast to fill in as part of the Wales Coastal Path, and todays 9 mile trek was one of them. In fact it was only 4.5 miles of the path but it was a there and back type of day. The sun was bright, even if it was a bit cold and we had to start with defrosting the car before starting out. A quick spin down the M4 to Baglan we found a parking space on Aberafan beach. this is yet another place we’;be never been to, even though we’ve dashed up and down the M4 so many times over the years, it was never a place to stop. The golden sands of the beach is huge and stretches all the way from the mouth of the Afon Nedd until it hits the walls of Port Talbot. Aberafan has a long history, and there have been Roman finds in the area when the docks at Port Talbot were being built. The most detailed and earliest records date back to when the Norman’s invaded and dispossessed the Welsh lords of the area, but Caradog ab Iestyn was able to hold onto his lands, which stretched between Afon Nedd and Afon Afan. He built a wooden castle near ton where St Mary’s Church now stands, but nothing remains of this defensive site. After it was burnt down, it was rebuilt in stone by his son Morgan ap Caradog. However, by 1373 the lands had fallen into the ownership for Hugh le Despencer, and the Welsh Lords existed no longer.

The walk stared with a brisk stroll along the wide sands as the tide was out. There’s something invigorating about a beach walk on a cold January day. It brings back memories of when I was growing up in Tywyn, and spending hours down the beach in all weathers and all seasons. The beach in Aberafan is a great place to come to find sea shells. There were hundreds scattered along the sands, Queen Scallops, Razor Shells, Mussles and of course because we are only over the bay from Swansea, Cockles. I also found a Whelk clinging onto a small pebble waiting for the tide to come back in. 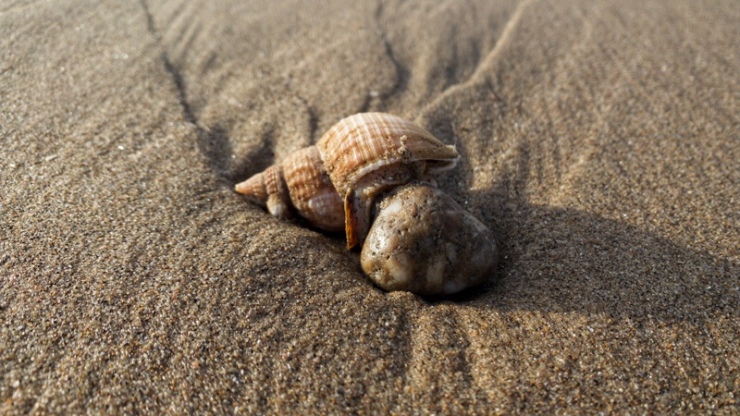 It wasn’t longer before we ran out of beach and came to the Afon Afan and Port Talbot Docks. In the 17th century Aberafan developed as a natural harbour at the mouth of the River Afan, providing export and transport for coal and sheep. The Industrial revolution from 1750 onwards saw an increase in coal mining and iron works quickly increasing trade in the area. In 1836 the river was diverted and by 1837 a new deep dock area was finished. this became the most developed port in South Wales, ahead of the developing Cardiff Docks. With more coal coming from the mines in the nearby valleys the port continued to be developed and expanded. Further expansion of the docks continued and in 1966, work commenced on the construction of the new Port Talbot Tidal Harbour, south-west of the existing docks system. Completed in 1970, it was the first dry-bulk cargo terminal in the UK capable of accepting ships in excess of 100,000 tonnes.

The port is now much quieter than in the past, but is still operating, mainly to support the steelworks. In fact everywhere you go along this stretch of the coast the Port Talbot Steelworks dominates the landscape. It is visible from the beaches to the east and west, from the M4 motor to the North, and also from the north Suffolk coast across the Severn to the South. This dominance is even more prominent within the town of Port Talbot itself. We continued to follow the Coastal Path inland through Port Talbot, over the railway line at the modern Port Talbot Parkway Station, built from steel. From Port Talbot we then moved into neighbouring village of Tai Bach.

It is here that the hulking towers and plumes of steam billowing from the chimneys assert their brooding presence over the small, narrow terraced streets surrounding the steel works. This is defiantly a tower built to house workers for the industrial might of the steel works. It is not the prettiest village in South Wales, and you wouldn’t expect it to be, but it could have been so much worse. Over 2017 and 2018 the steel works were threatened with closure. Apparently according to the Tata Management Board it wasn’t profitable enough. However following a small increase in the steel price suddenly the steel works was once again very profitable. Hmm…. you have to question the decisions that some international companies make. The loss of so many skilled and well paid jobs would have had a devastating impact on the wider community still trying to find it’s way following the closure of the mines and other heavy engineering industries. 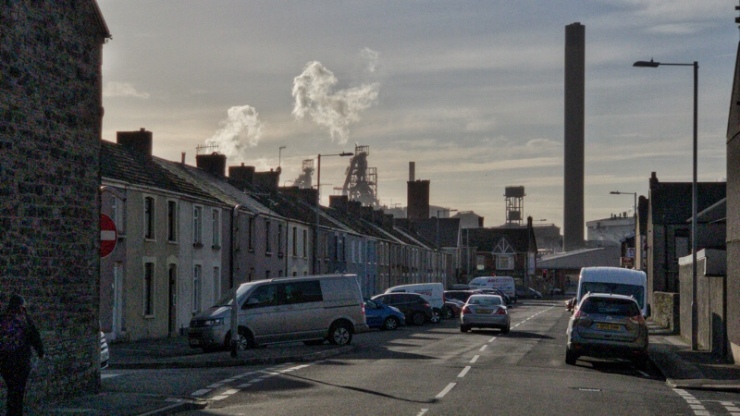 This being Wales right in the centre of Tai Bach is the Rugby Club, and in the beer garden there is a large sign seemingly displayed without identifying the irony of the missive – “No Ball Games”.

At Tai Bach we had reached the path we had already covered along the beach from Kenfig, and so we turned around and headed back to the car. Another section of the path completed, small it may have been, but it has to be done. The tide has com in by the time we got back to Aberafan, and OST of the sand had been reclaimed by the sea for a few hours. A great day and a great walk along a piece of the coast that we bypass so often on the M4 motorway. 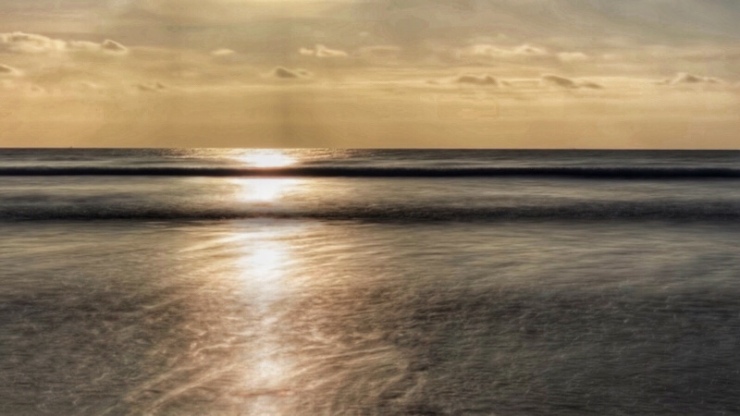