I’ve been a bit distracted lately but a few weeks ago Aunty and I (or is it me) spent the August Bank Holiday down West Wales again. The weather as usual on a Bank Holiday was not perfect, but at least it didn’t rain, so we went for a walk along the Wales Coastal Path from Manorbier towards Skrinkle Haven. We started off fairly early, but there were still a number of hardy souls already braving the waters at Manorbier beach.

Just around the corner and within sight of Manorbier is a Neolithic burial chamber, named locally as Kings Quoit. This is a simple chamber with the large capstone resting on two upright ortholiths at the front, and the rear of the capstone on the ground. Unusually it’s not set on the ridge, but lower down the slope, so it’s not immediately obvious. I sure that when it was built the outlook around the bay would have been different, but wpeven so it’s a great site to contemplate. 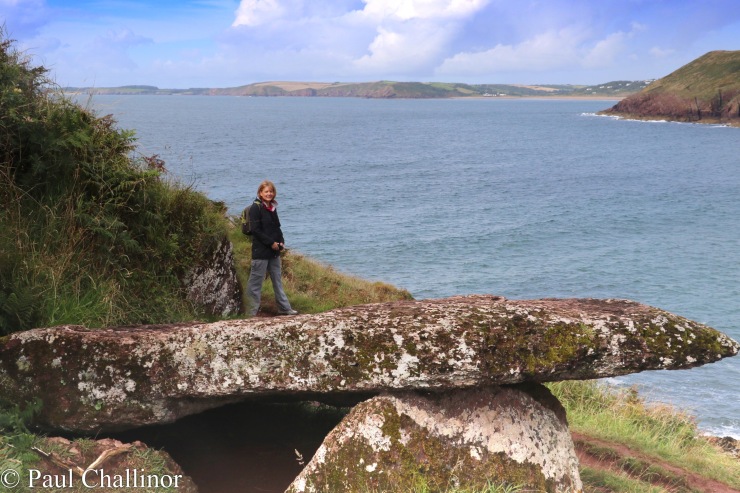 As ever the cliffs around this part of Pembrokeshire, though no high provide ever changing views as you walk follow the path around numerous corners. 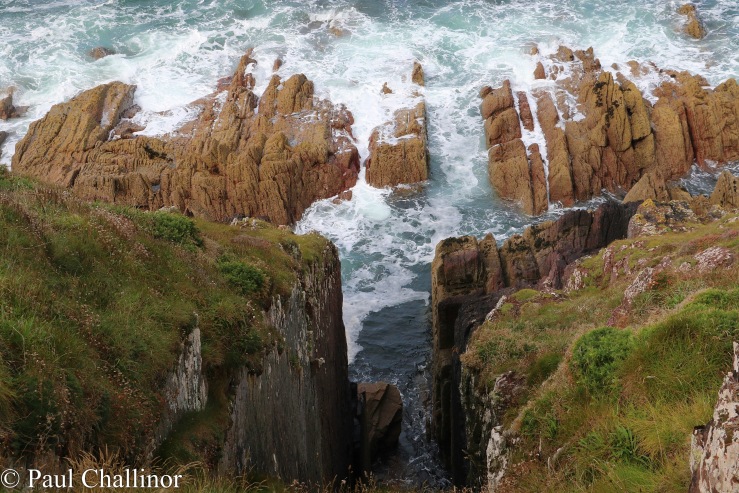 The geology along this section of the coast is fantastic. The fault lines and stratified layers of sandstone show how this section has been turned through 90 degrees as tectonic plates have crashed into each other. This is clear here at the secret bay  of Skrinkle Haven, below the Ministry of Defence firing range. The natural arch, Church Doors, looks like it will,collapse at any moment. Aunty is doing a good job as a sizing gauge!

Skrinkle Haven was off limits to the public for many years as it was situated beneath the firing arc of the Royal Artillery Range at Manorbier, and the Pembrokeshire National Park Coastal Footpath took an inland detour here to avoid the danger area. Anti-aircraft guns were fired from the range at drogue targets towed by Mosquito aircraft, and there were a few mishaps when inept gunners hit the planes instead of the target. The army later fired ground-to-air missiles from here, with a wide sea area controlled by patrol boats while the firing was going on. Indeed, the military presence here goes back nearly a century, for airships operated from Manorbier Camp during World War One, carrying out photographic reconnaissance over the sea.

In fact there are two bays at Skrinkle Haven. One is reached easily from the cliff tops by steps and a second larger beach can only be accessed at low tide or mph crawling through a short cave linking the two. Aptly demonstrated by Aunty the intrepid caver! 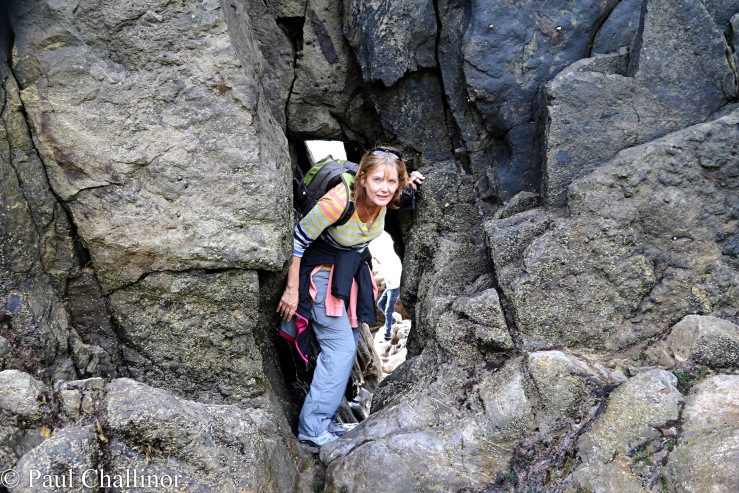 After a coffee on the beach we headed back before stopping for lunch at another bay, Presipe Haven. The 165 steps down were pretty easy, but they seemed to be much harder on the way back up. There were ever fewer people on this beach and we had great fun critiquing the style of a lone surfer – this is from a man mind you who can barely lie on a surf board on the beach without falling off.

As well as being a cracking walk I was also able to annoy Aunty with frequent photo stops along the way. One of my favourite late summer flowering plants was very much in evidence along the cliff tops, the Poached Egg Plant or Common Toadflax.

At last I was able to get a couple of clear photos of crickets. First a Field Grasshopper, Chorthippus brunneus:

And then a Meadow Grasshopper, Chorthippus parallelus.

An then finally a hitchhiking limpet. I wonder if the whelk knows it’s there? 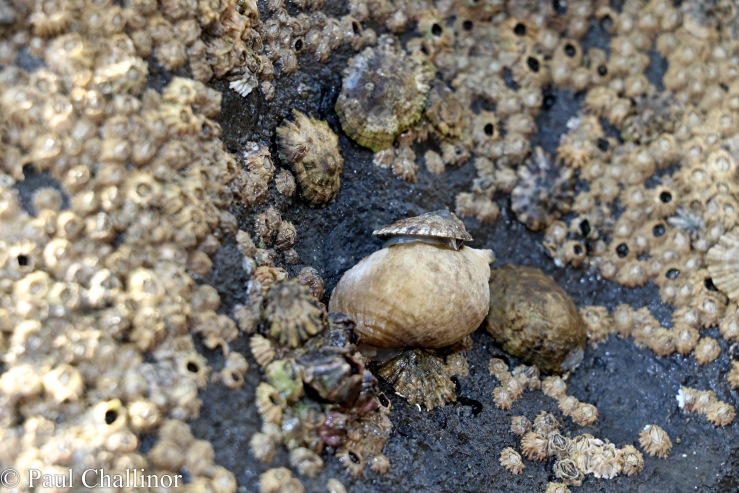